I.D.F THE SERIES 3 - For Security Reasons

The IDF is the largest organization in the state and its power is rising.

The IDF is a concept on which all Israeli generations were raised on. The connection between the army and the people is an almost symbiotic one. Chaim Yavin, Israel's Walter Cronkite, the series' presenter and director, reevaluates the IDF's place in Israeli society and presents various viewpoints surrounding this issue.

The IDF is the largest organization in the state and its power is rising. There are those from "The Old Guard," for whom the IDF and its ethos are sacred, untouchable and beyond reproach. But is this ethos not actually defending a powerful organization that has expanded excessively until the state cannot longer hold it? Are we not creating an army that is a nation in itself – a state within a state? Whatever happened to the concept of a "small, smart army"? Is it even possible to discuss the army in the casual way that one would discuss any other organization?
A series by Chaim Yavin and Anat Tzom Ayalon 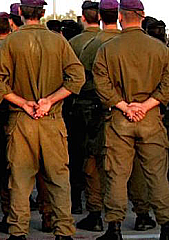